Why You Should Embrace Industrial Subscriptions

Wireless in Food and Beverage Applications

The use of standardized control systems (for food and beverage manufacturers) and machi...

Wireless in the Water and Wastewater Industry 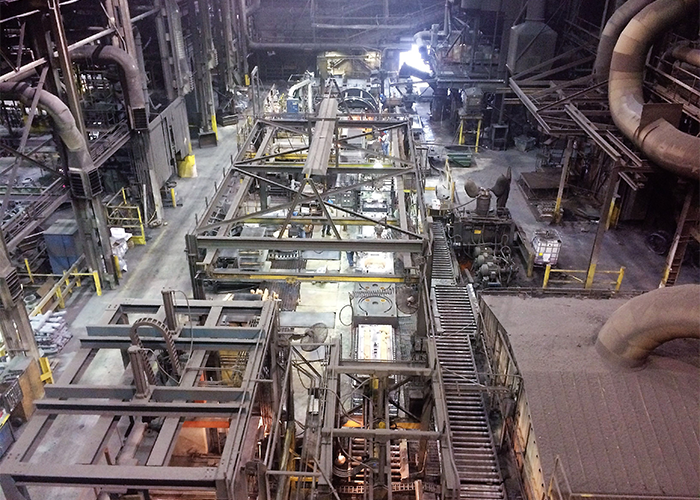 American Castings, headquartered in Pryor, Oklahoma, has been in the metal casting business for over a century. They manufacture everything from front and rear axles to backhoe booms for a variety of customers in industries including agriculture, mining, and oil and gas.

With high production levels, modernizing legacy systems can be a business challenge. But American Castings knew their system was due for an upgrade. They had a SY/MAX PLC with one processor and 10 remote I/O racks. This No Bake Production Line had about 1,000 I/O total. The system transfers metal castings that weigh up to 15 tons. The metal is poured into molds, which move on a conveyor to help the metal solidify. Once that process is complete, the castings are shaken and shot-blasted to remove sand mold and expose the solid metal.

The company was dealing with slow scan time, which caused cycle issues in the No Bake Production Line and their DOS-based software. Trying to find older computers that could run the software and had appropriate communication ports was an issue as well.

The team at American Castings knew they had to update their system, but one option didn’t sound so appealing. “We could have replaced the entire system – that would have led to major downtime and the outage of the line so we could convert all 10 remote racks and the logic to run the production line,” said Darryl MacKay, Maintenance Systems Manager at American Castings.

The company instead found a way to minimize its upgrade risk and costs by being able to keep the existing SY/MAX I/O – even after it switched to a Rockwell Automation® ControlLogix® system. By using an EtherNet/IP™ to Square D® Remote I/O Gateway from ProSoft Technology, the company found it could retain the existing SY/MAX I/O – and run the new and legacy systems in parallel, making sure they could troubleshoot any initial bugs in the new system while production kept up via the legacy setup. Switching processors while still keeping production running on the older SY/MAX network helped the company avoid the major downtime tied to a traditional rip-and-replace modernization project. Two American Castings employees – Roger Gibson, Automation Engineer, and Jerrod Estes, Automation Specialist – reviewed the gateway at a mini Automation Fair® and researched it to make sure it would work in the application.

Thanks to the gateway, the ControlLogix is able to control the SY/MAX I/O. In the long-term, the company is planning to replace the remote racks, but this phased modernization has enabled them to do the work on a timetable that makes sense for American Castings and its business goals.

The time and cost savings gained in opting for a phased modernization were sizable. Gibson estimated that the company saved about 100 hours by eliminating the need to rewire all of the I/O racks, and 40 hours of troubleshooting to make sure the system would work, since they were able to run the systems in parallel and not lose valuable production time. He projected the cost savings at over $100,000 in lost production and implementation time.

In addition to meeting the company’s goals of upgrading its controller, standardizing the control program, and decreasing the upgrade costs and risk by keeping the legacy I/O, Gibson noted American Castings achieved the following improvements:

• Recipe-driven mold-making, which will enable better follow-through of process control, faster scan time for better reaction from the line, and tightened conveyor movements

• Errors caused by slow scan/response times have been eliminated

Gibson said that commercial support from the distributor, Rexel, and regional sales and technical support from ProSoft were added benefits on the project. At the beginning they encountered a hurdle with 8-point legacy I/O cards that could not work in conjunction with the setup at first.

“The engineering group from ProSoft and Quest worked with us for days and weeks to overcome this,” Gibson said. “They went above and beyond on the support side to make us a happy customer.”

Have 2 minutes?Watch this video testimonialto find out how Tillamook Creamery underwent its migration!

Wondering about the risk level of each modernization approach? Check out this infographic.