Improving the Cleaning Process, One Module at a Time

Wireless I/O: No Trenching, No Permits, No Conduit. No Problem.

With Wireless I/O solutions, you can avoid the permits, trenching, and conduit that are...

With some Molex® SST™ products being moved to the obsolete column, your best approach m...

New modules and updated features will help you replace your legacy units, and bring gre...

Cellular technology can bring many benefits to an oil and gas application. Read this bl... 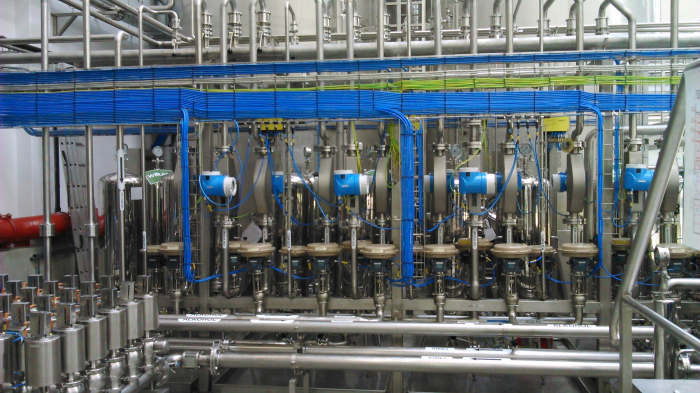 Improving the Cleaning Process, One Module at a Time

When your food or beverage products are made in – or go through – a variety of machines in a processing or bottling facility, a top priority for their manufacturers is cleanliness.

Cleaning in Place (or CIP) systems provide a perfectly regulated way to keep every piece of equipment clean. These systems essentially allow users to clean machinery and pipes without having to dismantle a whole system. By coordinating with the production PLCs in a facility, a CIP system is able to schedule, perform, and complete the cleaning operation. The coordination of these separate systems is critical to ensure that production cannot resume until the entire cleaning cycle is complete. The communication is used as a handshake between the production PLC and the CIP PLC so that both systems know when cleaning starts; when it ends; and when product can safely be put back into the devices.

MAGMA SAP of Poland manufactures CIP stations for a variety of beverage manufacturers.

“Fifty years ago, you would have had a guy with a garden hose washing down the equipment,” said Maciej Alksnin, MAGMA CEO. “With our system, it is both hygienic and completely automated.”

MAGMA builds four to six stations per year. Their stations are constructed and controlled in accordance with Hazard Analysis Critical Control Point (HACCP) standards, which analyze and control hazards involved with material production and distribution. MAGMA’s CIP stations are set up to supervise the temperature and concentration of the closed-loop washing solution; the timing of the cleaning process’ steps; the configuration of the circuit connections throughout the system; and the flow inside the equipment being cleaned. The cleaning solution’s setup is protected with a password, and the solution’s parameters can be set up individually, making it easier to customize your setup or make adjustments as needed. The cleaning stations are equipped with a controller that communicates with an HMI, which is used by the operator on each cleaning cycle, which is used to archive data that is set by the controller.

For a CIP station done for a bottled mineral water manufacturer, a Rockwell Automation® CompactLogix™ was used. Siemens® systems are widely used in the food and beverage industry in Poland, so you can see where there would be a communication issue. That’s where ProSoft Technology helped.

“MAGMA wanted a partner that was reliable and would work with them through the process,” said Krzysztof Hajzyk, then-Regional Sales Manager for ProSoft Technology. “They have a good relationship with their Rockwell Automation distributor and ProSoft Technology had provided on-site support with their first few applications. They have worked with Allen-Bradley® controllers containing ProSoft in-chassis PROFIBUS cards in several other applications and had success.”

MAGMA has also used ProSoft products for other applications, including pigging systems in food processing projects.

ProSoft’s in-rack PROFIBUS solutions allowed the CompactLogix to communicate with the Siemens equipment used throughout the facility. The module enabled the controller to exchange data with the facility’s existing PLCs and measuring equipment, which tracks flow, temperature, pressure, and level, ensuring that any issues are communicated quickly. Without ProSoft’s PROFIBUS modules, it would have been far more costly and complicated to communicate with the existing production line and coordinate data transfers involving the statuses of equipment such as tanks, pipes, and valves.

Without ProSoft’s PROFIBUS modules, an alternative would have been the addition of extra I/O, which would have been more expensive and taken more time to implement. The new setup also allowed for direct access to data in other processors’ memory, allowing for ease of use when it came to monitoring the system. In addition, having one network for all equipment and data exchanges helped simplify the operation: With the process machines connected to each other, connecting to one allowed access to the rest.

These improvements allowed MAGMA and the end user to focus on the most important part of the process: keeping the mineral water clean.