A Seamless Wireless Setup for an Oil Recovery Application 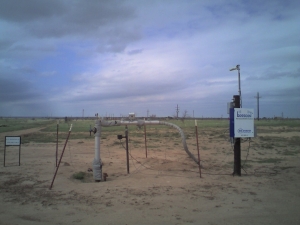 A petroleum company had its sights set on an ambitious enhanced oil recovery project in the Texas panhandle. The company uses state-of-the-art technology and methods to successfully recover oil from wells that would have once been considered “tapped.” The waterflooding process uses pressurized water to move through the formation, driving raw crude oil out of the ground from wells.

Boss Automation was brought in to design and install the discrete automation platform and a control network to monitor pressure and flow of this water into the wells. With their experience in automation, control, and process optimization, the project evolved into the design and implementation of a new, fully automated, self-monitored SCADA system. The system was designed to gather, assemble, and transmit data from the wells and injectors and ultimately bring it back to a master station. This allowed the day-to-day operation of the field to be monitored and controlled from these sites, and allowed the collected data to be used to produce detailed production models.

Considerations for the system included reliability, maintainability, ease of use, and the ability to obtain local support. With the aid of the distributor Rexel, Boss Automation decided on a winning combination of Allen-Bradley® hardware, Rockwell Automation® software, and ProSoft Technology wireless communication solutions. Boss Automation’s familiarity and past success with these automation products made them confident in the combined solution.

A business development manager for Rockwell Automation noted: “For this application, ProSoft’s wireless technology provides the backbone communication for the integration of this system, creating a reliable, industrial, and transparent network that allows the petroleum company to successfully monitor their process data remotely." 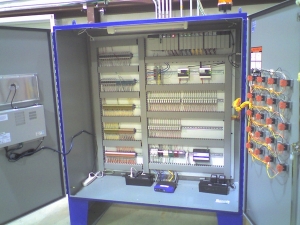 At the main master station, an HMI application for the system was developed using Rockwell Automation’s RSView® 32 software. The graphical interface screens have proven to be user-friendly, and the Messenger Pro feature provides the operators with detailed information about alarm conditions in a human voice, by automatically calling the cell phone of the person on call.

An impressive amount of data—over 3500 discrete Input/Output as well as 1000 analog points—is gathered and moved across the wireless network at about 11 Mbps to the main master station, where it is then assembled into data log models, then interfaced by the end user’s own proprietary modeling software.

Rexel was instrumental in providing logistical and technical support for the project. With respect to the large-scale wireless network, ProSoft Technology provided engineering support throughout the length of the project.

“From the technical side of the project, the main reason this is a success story is because of the planning and care taken before starting the project,” said the ProSoft Wireless Engineer who worked with the end user. “I spent time with Boss Automation control engineers on a path study. We worked very closely together, before and throughout the installation of the project, not only on the layout of the network but on the strategy for PLC messaging.”

The overall network covered approximately 12 square miles, with the longest link being only about 2 miles, and a bulk of the radios were positioned in an area of about 3 square miles, which presented a concern. 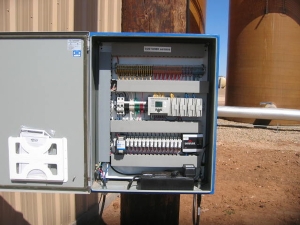 “In a radio network of this size it is imperative that care be taken in setting up the PLC messaging,” ProSoft’s Wireless Engineer said. “If all radios are trying to communicate at the same time, you can quickly swamp your bandwidth with RF collisions and retries. With this in mind, we discussed the need to create a polling-style network rather than having all the radios trying to communicate at the same time. It takes a lot of planning up front to successfully install a radio installation of this size, and ProSoft’s Technical Support group provides an excellent planning resource.”

After the application’s implementation, the setup has had near-zero downtime. “The wireless network works so seamlessly and reliably that it is virtually transparent to the user,” a Boss Automation representative said. “When all was said and done I asked the customer how they liked the wireless network. Their response: What wireless network?”